The British HMS Repulse is a must for technical divers with battle artifacts from anti aircraft guns to five massive propellers.

The HMS Repulse was a 36,000 ton Renown class battleship built on the Clydebank in 1916. She initially saw service in the North Sea during World War I. After two extensive refits she spent the first two years of WWII operating with the home fleet in the North Sea and Atlantic Ocean and was involved in the pursuit of the Bismarck in 1941. Later in 1941 she sailed to Singapore with the new battleship Prince of Wales. When Japan entered the war both ships steamed from Singapore northwards up the east coast of Malaysia to intercept the invading Japanese forces. On 10 December 1941 both ships were attacked by Japanese bomber and torpedo planes. Both ships received extensive damage and sank.

HMS Repulse now lies on her port side in 55m about 50 nautical miles north of Tioman Island and is one of the most popular wreck dives in the region for technical divers with the required training to dive her. Although shallow parts of the wreck are suitable for recreational divers, other deeper and inner areas required technical diving certification.

The wreck is 242m long, a huge ship that requires many dives to explore fully. There are three sets of 15" guns and four anti aircraft guns. Four huge propellers are visible and the wreck is penetrable. Visibility is usually 10-30m but can be less and occasionally is more. Currents can be strong. Marine life around the wreck is prolific including white tip reef sharks, black tip reef sharks, very big groupers, marble rays, schools of great barracuda, trevally and snapper. Whale sharks have been sighted here on occasions.

This is one of many wrecks in the South East Asia region and as technical diving becomes more popular, more of these dive sites are being discovered. 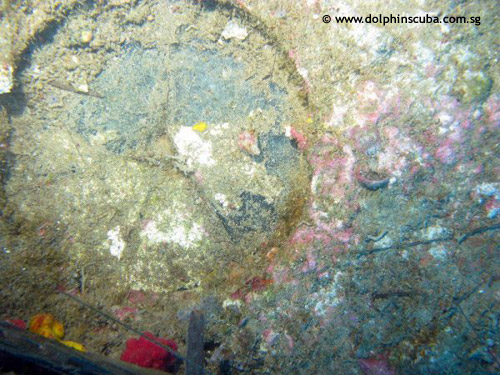 Visit our partners! Or become one.

One of the oldest and most respected diving centers in Malaysia is B&J Diving Centre. Established in 1987, B&J operates today 2 dive centers on Tioman Island and 1 dive shop in Johor Bahru. Strategically located in the northern part of Tioman Island in Salang Bay and in Ayer Batang (aka ABC), B&J is close to some of the best reefs that Asia has to offer.

It might not be known to many but Tioman Island is home to some of the healthiest coral reefs and a myriad of marine life. B&J has been there from the beginning and has helped maintain these reefs by organizing regular environmental events such as cleanup days, COT (Crown Of Thorns) collection and more. B&J has been awarded several times by PADI as a “Project AWARE Environmental Achievement Award Winner”. B&J is also a “Go-Eco Operator” and a “Longitude 181 Ambassador”, promoting environmentally safe diving with a strict no glove and no touch policy. The main pride of B&J lies in it’s quality and services. The Malay/German/Swiss management ensures that every dive student and diver receives high quality diver education and a 100% safe diving experience. The dive equipment is well maintained and regularly replaced, the air is tested for purity, the dive boats large and comfortable and the dive groups are kept small. As a PADI 5 Star IDC (Instructor Development Center), B&J is amongst the top dive centers in Asia and the very experienced instructors teach all courses from beginner to instructor level. B&J is also a DSAT and IANTD Technical Diving Facility and provide DAN O2 Provider Courses. B&J is also a pioneer in the education of children. If you like to see some of the most beautiful coral gardens in the South China Sea, a vast variety of tropical reef fish, turtles, sharks, cuttlefish and some of the best spots for nudibranchs in the world, then you shouldn’t miss a visit to Tioman Island. Two Tank dive trips for certified divers are organized daily and you have the choice of additional afternoon boat dives or night dives. If you prefer to take it more relaxed, then you should head for some great muck diving on the house reefs. Nitrox is readily available.If you are just a recreational diver who likes to glide along amazing reefs or if you are more interested in technical diving and would like to dive the famous wrecks from World War II like the HMS Repulse or the HMS Prince of Wales, B&J can do literally everything for you.
[Add Message]Messages from readers:

The HMS Repulse was deployed to South East Asia as part of the Z-Force, in the battle with Japan and is a real World War II history wreck. She sailed from Singapore on 8th December 1941, alongside the MHS Prince of Wales and 4 other destroyers to intercept the Japanese invasion craft headed for the coast of Malaysia.

On the 10th December, she sustained heavy attacks by bombers and torpedo aircraft. Two bombs caused severe damage and fires; subsequent torpedo attacks resulted in 4 fatal hits to her, she sunk within 2 minutes; over 500 crew perished.

She now sits at the bottom of the South China Sea, just off from Tioman in about 55 meters of water; and lying on her starboard side and shrouded in fishing nets.

I have a small (6 inch or so) bowl -- mess type material -- that is stamped under its rim: "HMS Repulse" It is very old. Could it be from the ship, Repulse? What do you think?