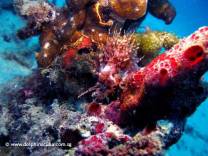 Most Popular Pictures All

Malaysia is a country known for its many accessible white sanded islands and superb scuba diving reefs.

Recent diving activity from our members

Pictures crafti
Chek Isa, Mini Mount:
Chek Isa is a great macro dive site but it also has so many fish that it is like diving through fish soup, both large a...
- Tanjung Tokong: Tanjung Tokong is a great dive site that actually ...
- Ling: If you like diving on a pretty coral dive site the...
Messages Paul Leggott
HMS Repulse:
I have a small (6 inch or so) bowl -- mess type material -- that is stamped under its rim: "HMS Repulse" It ...
Messages James Eckblad
American Wreck, USS Salute:
When entering the wreck also keep in mind that it is the final resting place for 9 sailors. Ralph Shafer is still entomb...
Messages Dennis Jackson

Malaysia has become one of the top holiday and diving destinations in South East Asia, mainly because of its pristine white beaches and beautiful accessible islands. Peninsular Malaysia has always been the more developed side of Malaysia while Sarawak and Sabah have been more remote known for its orangutans (Sepok Orang-Utan Rehabilitation Center), rainforests and wilderness. Because of its rich history (spice trade, oil, gas, wood) and colonization, it has always been visited by settlers from all over the world, creating a country with mixed religions and a widespread variety of dining, traditions and culture.

There are many things to do in Malaysia. The western Peninsula attracts many travelers for islands such as Langkawi and Penang, but also for historical towns such as Melacca. Its capital of Kuala Lumpur has excellent architecture, such as the Petronas Tower and some of the best Kuala Lumpur hotels in the area. Scuba divers will know Payar marine Park and Pulau Pangkor offering some of the best diving but with slightly less visibility than elsewhere in Malaysia.

The Cameron Highlands offer a cool climate filled with tea plantations. Hiking along the trails throughout the country is the best way to spot animals (Maquacues, Orang-utans), birds (Hornbill) and plants such as the world's largest flower the Rafflesia. The eastern side offers trips to white sandy islands such as Pulau Tioman and Aur Island. Also the islands near Kuala Terangganu such as the Perhentians, Redang, Bidong and Tenggol offer excellent getaway trips, especially in weekend and local holidays. The bustling city of Singapore with all its skyscrapers and brilliant skyline is a must sea. Sarawak is not especially known for scuba diving (Miri and the Luconia Shoals) but more so for rainforest enthusiasts, its animal kingdom and indigenous tribes such as the Iban. Tunku Abdul Rahman Park, Layang Layang and Pulau Tiga are located in front of Kuala Kinabalu. But also the regions of Sandakan with turtle islands (Pulau Selingan), Lankayan and the region around Labuan are well established locations for travelers and divers. Some of the best scuba destinations in Malaysia are the islands Sipadan, Mabul and Kapalai just offshore Semporna in the southeast of Sabah, Celebes Sea. Together with Pulau Mantabuan, Pulau Sibuan and Pulau Mataking they boast of encounters with rich, large and unique marine species.

Most people know Malaysia because of its stunning white beaches, tropical rainforests and rich and colorful underwater fish and coral life. Scuba diving, snorkeling and other water activities are some of the most rewarding experiences to get a good look at what Malaysia has to offer. The South China Sea, in between Peninsular Malaysia and Borneo, and the Malacca Strait are both rich marine environments offering almost all species that can be found in the Indo Pacific waters. The oceanic deep upwelling provide for healthy and nutrient water, water temperatures just above the equator are between 25 and 30 degrees year-around and tourism is increasing meaning that more and more destinations are explored and offered to tourists. You can dive at steep walls, fringing coral atolls, wrecks, deep canyons, with large fauna such as whale sharks, hammerhead sharks, manta rays, turtles, dolphins but also with macro species such as mandarin fish, nudibranch and ghost pipefish. Many award winning macro photographs have been taken at the reefs near Sipadan, Kapalai, Mabul, Layang Layang, Lankayan, Tioman and Perhentian. It is one of the world's best scuba dive destinations.